An historical and traditional salt

A citadel built specifically around salt

The history of the “Citadel of Salt” at Salies-de-Béarn goes back to Antiquity and it is shaped by salt, not the other way round. For several centuries, saltwater ruled the waking hours of the inhabitants, who are called “salisiens” locally.

Transporting saltwater literally shaped the town, which has adopted a snail-like spiral, radiating outwards from what is now Bayaà Square, the original salt spring.

From this open air pool, the water was drawn in a very closely prescribed ritual.

At set hours of the day, porters, called “tiradous” would take hold of special brine buckets (“sameaux”) and run the length and breadth of the citadel, emptying the saltwater into special stone troughs, called “coulédés” that were installed in front of saltmakers’ houses.

In 1840, a Salt Law obliged saltmakers to produce a minimum of 500 tonnes of salt a year. From then on, saltmaking could only be done on a single site. This is the birth of the Saltworks at Salies-de-Béarn.

Today salt still occupies a central place in the heart of the social and cultural life of Salies-de-Béarn and its surrounding area.

Only the Saltworks at Salies-de-Béarn still use the open air saltpans. They have chosen to keep the original technique, which dates back to ancient times and respects the product.

At the heart of the old town of Salies-de-Béarn is the House of Darrémoudine, a 17th century timbered building which has been completely restored and turned into a museum and learning resource.

The Salt Museum has three levels and displays the history of salt at Salies-de-Béarn, from primitive Bronze Age salt extraction techniques to a thermal station in the third millennium: in all 35 centuries of history.

The friends of Vieux Salies

The Association of Friends of Vieux Salies was founded in 1972 with the aim of preserving the architectural, cultural and linguistic heritage of Salies-de-Béarn and its region.

The Salt Council association (Jurade du sel) organises numerous activities on the topic of salt: exhibitions, workshops, themed evenings, as well as the famous Salt Festival or Hesta de la sau. Given that the local Saliens are so indebted to their salt, naturally they pay homage to it every year over the second weekend of September, during the Hesta de la sau.

The Salt Festival attracts over 10,000 people, who enjoy:

Salt from Salies de Béarn: a source of inspiration for artists

The story of Salies de Béarn has inspired numerous artists: their works bear witness of this to this day.

Today’s Boar’s Fountain is ensconced in the corner of Bayaà Square in Salies-de-Béarn and dates from 1927.

This sculptured fountain in the shape of a boar’s head has become the emblem of the town.

Above the animal’s sculpted head, you can read these words, engraved in Béarnais, the local language of Gascony. “Si you nou eri mourt, arres n’y bibéré” (If I wasn’t dead, no-one would live). Extract from the book Salies-de-Béarn, Cité du Sel, published in French by Jean Labarthe. 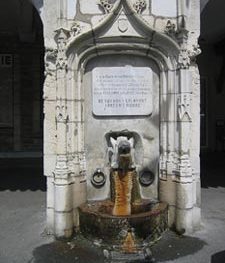 Through the millennia, the saltwater spring has been the object of numerous injustices, angry outbursts and violations of the law that have earned the local nickname of « prauba muda » (poor mute girl): who is a silent witness of this history.

The sculptor Jean-Lucien Tisne executed this work in 1875.